For the vast majority of people that are reading this, you are using a computer keyboard with the QWERTY layout. This has been the standard layout since the 1870s, when the typewriter was invented. Back then, the keyboard layout was dictated by mechanical limitations; pressing keys next to each other in rapid succession could cause it to jam, so keys had to be strategically placed to minimize that as much as possible. Another small (and possibly unintentional) of the QWERTY layout is that you can type the word “typewriter” on the top row, which would’ve been great for demonstrative purposes.

So why switch? Why buck the trend and intentionally make life difficult for myself?

Well, one major reason is ergonomics. As you can see in the image below, the QWERTY keyboard spreads the most-used keys all over the keyboard. The Dvorak layout attempted to solve this issue back in the 1930s, but never caught on for a variety of reasons. The layout does manage to bring most of the main keys onto the home row, but EVERYTHING seemingly gets shifted. Undo/Cut/Copy/Paste commands that you and I take for granted would have to be completely relearned. Colemak, on the other hand, manages to bring everything in line without sacrificing every shortcut you might be used to. 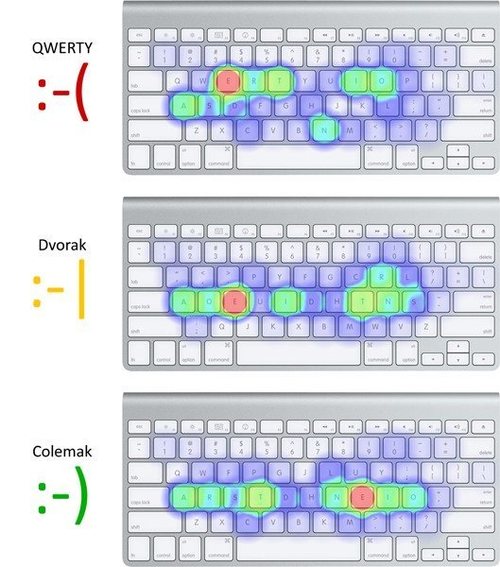 “But how am I supposed to switch? Wouldn’t that be confusing?” For sure. Making a direct transition is something that would probably cause a ton of headaches, and likely severely impact productivity. I wouldn’t recommend trying to learn at home while sticking with QWERTY at work; the repetition is part of what will help anchor the muscle memory.

So what’s the solution? A transition method called Tarmak. Instead of shifting all of the keys all at once, you only shift about 4 keys at a time. This gives you a chance to learn those specific locations before moving on to the next step. Some people do a step every day, others do a step per week, and some go as long as a month before moving on to the next steps. Myself, I just transitioned to Step 3 of 5 this morning, and I’ve found myself spending about 5 days with each step.

My thoughts so far are mostly positive. My typing speed is WAY down; I’m doing my best to focus on being precise with my typing, as opposed to just backspacing and fixing mistakes. I’m able to reliably hit 50+ WPM after 5 days with each step, but switching drops it back down again. I think it’s pretty cool to see how little my fingers have to move to type things, or how little the letter J is actually used, considering it lives right underneath your left pointer finger. I’m also fretting over what rebinding all of my keys for gaming is gonna be like, but that’s a mostly minor issue.

Overall, though, this has been an enjoyable exercise that I’m going to keep progressing with, if only because I’m stubborn and don’t like giving up. If you’re looking for a nerdy project to challenge yourself with, or if you deal with wrist pain and would enjoy typing being just a little easier, I highly recommend you giving Colemak a try.